Grbl (pronounced gerbil) \ˈjər-bəl\ is a CNC controller software that runs on an Arduino (or similar) microcontroller.

From the Grbl Github page:

Grbl is a no-compromise, high performance, low cost alternative to parallel-port-based motion control for CNC milling. It will run on a vanilla Arduino (Duemillanove/Uno) as long as it sports an Atmega 328.

The controller is written in highly optimized C utilizing every clever feature of the AVR-chips to achieve precise timing and asynchronous operation. It is able to maintain up to 30kHz of stable, jitter free control pulses.

It accepts standards-compliant G-code and has been tested with the output of several CAM tools with no problems. Arcs, circles and helical motion are fully supported, as well as, other basic functional g-code commands. Functions and variables are not currently supported, but may be included in future releases in a form of a pre-processor.

Grbl includes full acceleration management with look ahead. That means the controller will look up to 18 motions into the future and plan its velocities ahead to deliver smooth acceleration and jerk-free cornering.[1]

Installation is very easy when using a software program developed for Windows called XLoader and the Arduino IDE. It is assumed that you will have some experience using an Arduino, but interaction with the Arduino is limited once configured and installed. 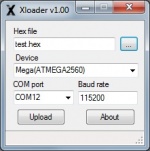 There are several open source software programs that run on your computer and feed G-code files to the Arduino to run a CNC Machine.